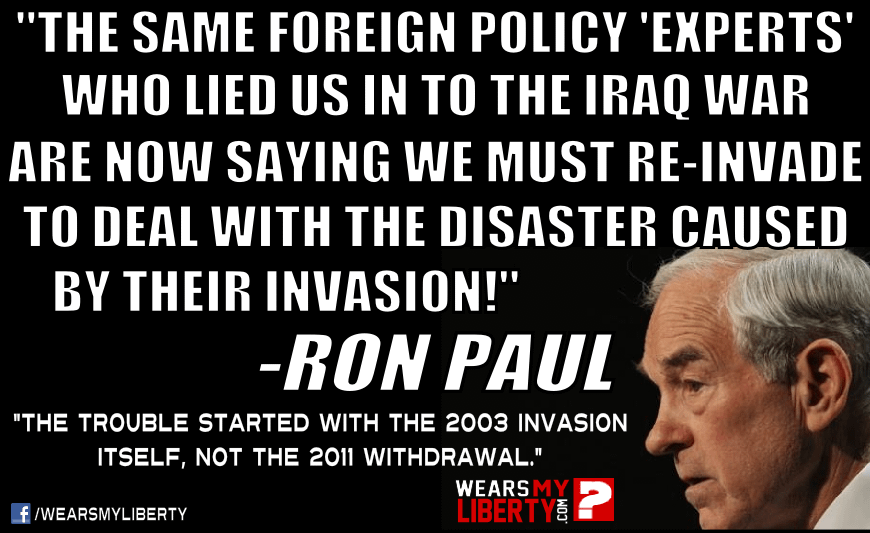 “The same foreign policy ‘experts’ who lied us in to the Iraq war are now saying we must re-invade to deal with the disaster caused by their invasion!”  – Ron Paul

The situation in Iraq is a predictable consequence of an interventionist foreign policy. When you overthrow one regime you create a power vacuum that risks being filled by someone even worse.

“No credible evidence has been produced that Iraq has or is close to having nuclear weapons. No evidence exists to show that Iraq harbors al Qaeda terrorists. Quite to the contrary, experts on this region recognize Hussein as an enemy of the al Qaeda and a foe to Islamic fundamentalism.”

There is no argument that Saddam was a horrible dictator.  But what we are seeing now is that things are not as simple as a choice between “Saddam’s Iraq” or “a completely peaceful and free Iraq”.

People who believe in free markets understand that when the government gets involved – even with good intentions – there are unintended consequences.  The same is true for foreign policy.

When the US gets involved around the world supporting some dictators and overthrowing others it ends up causing more problems than it solves.  This can be seen even in Iraq itself, with the US first supporting Saddam’s war against Iran only to then turn around and wage war against Saddam.

Iran was our enemy so we supported their enemy.  The US should have learned then that supporting the enemy of your enemy is not necessarily in your best interest.

This situation has played out many times throughout history.  Most recently the US gave arms and training to Syrian rebels in their fight against Assad.  It’s possible that training is now being used against the American trained Iraqi army.

It’s difficult to know whether the rebels allegedly trained by the US in Jordan have since joined ISIS, but The Washington Post is reporting that ISIS just released a new propaganda video touting its American-style military tactics. The video not only shows a capable military force with mature training, but it also contains footage of rebel fighters using an anti-tank guided missile system.

As terrible as ISIS may be, the US should be cautious of the unintended consequences that will result from getting involved in Iraq once again.

The world is full of dictators and organizations that are responsible for horrible acts.  People in many countries are not free.  And we should root for them to one day become free.

On the other hand, when the US gets involved they create more enemies.  Every dictator they support from Iran’s Shah to Egypt’s Mubarak breeds hatred.  Every bomb and drone strike creates new fighters out of the target’s friends and family.  Every airstrike that hits a school or a wedding is recruiting fuel used to convince more young men to join the fight.

Most of all we must learn that a non-interventionist foreign policy is one that actually keeps America the safest.  We must remind people of the problems caused by past wars so that we can prevent the next one.