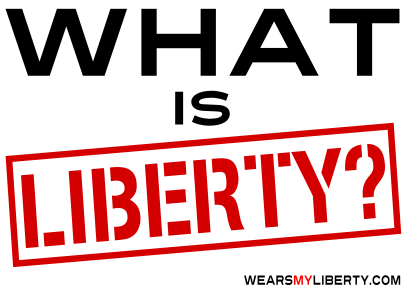 In it’s simplest explanation, liberty means that you own your own life and property.

You are free to make your own choices for your life and property – as long as it doesn’t infringe on anyone else’s right to their life or property.

If you take someone’s liberty, it is slavery.

If you take someone’s life, it is murder.

If you take someone’s property, it is theft.

No person – or group – has a right to use force to impose their will on others.

Ron Paul said, “Government should never be able to do anything you can’t do“.

This means that if you can’t steal from your neighbor, you can’t give government the power to steal on your behalf.

You can not delegate a right to someone else if you do not first have that right yourself.

It makes no difference how large a group is that votes to give government a power which they as individuals do not have.

The majority does not have the right to use government force against the minority.

Imagine going to lunch with 3 friends. Each of you order a milkshake.  You want strawberry, but your friends order chocolate milkshakes because they don’t like strawberry.

Your friends also vote 3-1 that you are not allowed to have strawberry and must order chocolate.

In a democracy, you would lose the vote and be forced to obey the will of the majority.

Liberty means that you get to enjoy the milkshake you want, and your friends get to drink whichever flavor they want.

You may not agree with the choices others make, but you must recognize their right to make them.

If we are only free to make good decisions, we are not really free.

What Is Your Definition Of Liberty?

“Liberty is the freedom to exercise the rights that I have been given.” – Lucas F.

“To be able to do as i please as long as i have not hurt another person, or their property, or disturbed their peace.”  – Loren on Facebook

“Liberty is doing whatever it is you want in life as long as it does not harm other people or their property.”  – claybridge on The Daily Paul

Check out all of our Liberty Shirts to help spread the message!

Liberty Is Popular Around The World

This is a map of people that have recently visited this page searching for the meaning of liberty.

“The people cannot delegate to government the power to do anything which would be unlawful for them to do themselves.”

“The only purpose for which power can be rightfully exercised over any member of a civilized community, against his will, is to prevent harm to others. His own good, either physical or moral, is not a sufficient warrant.”

“Is life so dear, or peace so sweet, as to be purchased at the price of chains and slavery? Forbid it, Almighty God!

I know not what course others may take; but as for me, give me liberty or give me death!”

“Guard with jealous attention the public liberty. Suspect every one who approaches that jewel.  Unfortunately, nothing will preserve it but downright force. Whenever you give up that force, you are inevitably ruined.”

“Ideas spread.  They can’t be stopped.  An idea whose time has come cannot be stopped by any army or any government.”

“Liberty is always freedom from the government.”

Check out our collection of Liberty Memes

If you love liberty and you want to help spread the message to people on the street, make sure to check out our Ron Paul Revolution shirt and our “An Idea Whose Time Has Come” shirt. 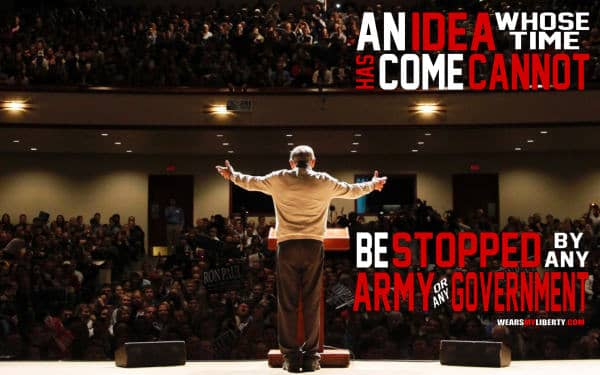