What Does Ron Paul Invest In? 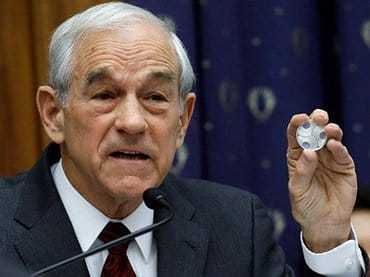 If you know anything about Ron Paul, you probably already know the answer to that question.  For years Paul has warned about inflation caused by the Federal Reserve’s various “quantitative easing” moves and it’s manipulation of interest rates.  He speaks about how paper fiat money is doomed to fail and that commodities such as silver and gold hold their value and have been used as money throughout history.

Looking at his investment portfolio it’s clear that he isn’t afraid to back up his words with his own money.

From the Wall Street Journal:

Give or take a few percentage points, a typical Congressional portfolio might have 10% in cash, 10% in bonds or bond funds, 20% in real estate, and 60% in stocks or stock funds.

Yes, about 21% of Rep. Paul’s holdings are in real estate and roughly 14% in cash. But he owns no bonds or bond funds and has only 0.1% in stock funds. Furthermore, the stock funds that Rep. Paul does own are all “short,” or make bets against, U.S. stocks. One is a “double inverse” fund that, on a daily basis, goes up twice as much as its stock benchmark goes down.

The remainder of Rep. Paul’s portfolio – fully 64% of his assets – is entirely in gold and silver mining stocks. He owns no Apple, no ExxonMobil, no Procter & Gamble, no General Electric, no Johnson & Johnson, not even a diversified mutual fund that holds a broad basket of stocks. Rep. Paul doesn’t own stock in any major companies at all except big precious-metals stocks like Barrick Gold, Goldcorp and Newmont Mining.

So it appears that the man who predicted the economic crash of 2008 back in 2002 is betting his money that there will be more hard times ahead for the US economy.  Specifically hyper-inflation and a collapse of the dollar.

It would seem a wise move to listen to his advice and follow his actions.