Rand Paul – Deal With It

While Rand Paul was leading a 13 hour filibuster on the Senate floor to fight for Liberty and bring attention to the potential use of drone strikes against American citizens, Senators John McCain and Lindsey Graham were busy having dinner with the President.

“The country needs more senators who care about liberty, but if Mr. Paul wants to be taken seriously he needs to do more than pull political stunts that fire up impressionable libertarian kids in their college dorms. He needs to know what he’s talking about,” said Mr. McCain

So according to John McCain, only “impressionable libertarian kids in the college dorms” care about whether the government claims the authority to assassinate American citizens inside America without due process?

Lindsey Graham said that Rand Paul’s question to Attorney General Eric Holder, asking whether or not the President believes he has the authority to use lethal force against an American citizen on U.S. soil when there is no “imminent danger” and who are not actively engaged in combat, was “ludicrous”.

“I do not believe that question deserves an answer,” Mr. Graham said.

Hey Senators McCain and Graham, Rand Paul is taking the party back and he has a message for you and your establishment friends, “Deal With It”. 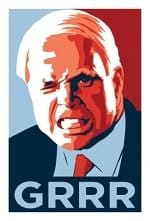