Non Interventionism Is NOT Isolationism 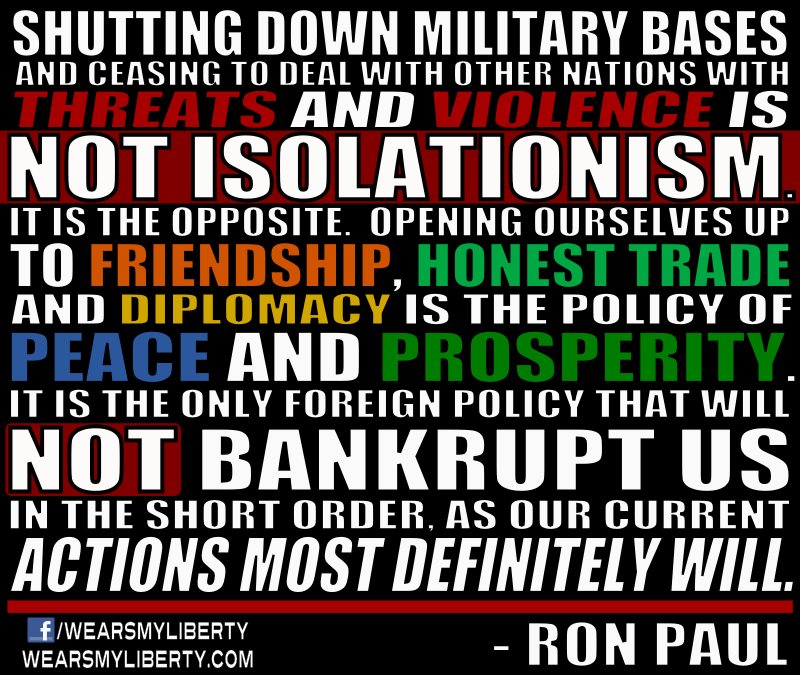 “Shutting down military bases and ceasing to deal with other nations with threats and violence is NOT isolationism.  It is the opposite.  Opening ourselves up to friendship, honest trade and diplomacy is the policy of peace and prosperity.  It is the only foreign policy that will not bankrupt us in the short order, as our current actions most definitely will.”  – Ron Paul

We have 900 military bases in 130 countries. The national debt is over $16 trillion. This is unsustainable.

Spending $800 billion a year to station our military around the world actually makes us less safe.  The biggest threat to our national security is our growing debt.  If there ever were a large threat in the future we won’t be able to defend ourselves if we have no money and our troops are spread thin around the world.

We spend billions of dollars and have huge bases in countries like Japan and Germany.  World War II and the Cold War are over.  These countries have the ability to defend themselves.  Our troops should based in America in order to protect this country.

“The sad thing is, our foreign policy WILL change eventually, as Rome’s did, when all budgetary and monetary tricks to fund it are exhausted.” – Ron Paul