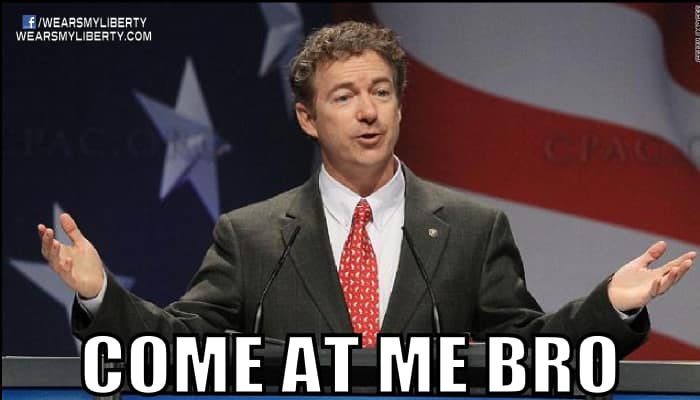 New Jersey Governor Chris Christie has joined Rep. Peter King in trying to start a war of words with Sen. Rand Paul, the current front runner for the 2016 GOP nomination.

It started when Christie warned that the “strain of libertarianism” being led by Paul is “a very dangerous thought.”

While speaking in Colorado last week Christie said, “I just want us to be really cautious because this strain of libertarianism going through both parties right now and making big headlines I think is a very dangerous thought.”

He then brought up September 11th saying, “These esoteric intellectual debates, I want them to come to New Jersey and sit in front of the widows and the orphans and have that conversation. And they won’t, because that’s a much tougher conversation to have.”

Rand Paul responded, “It’s really, I think, kind of sad and cheap that he would use the cloak of 9/11 victims and say, ‘I’m the only one who cares about these victims.’ Hogwash.”

Christie wasn’t finished, accusing Paul of only being interested in “bringing home the bacon”.

“If Senator Paul wants to start looking at where he’s going to cut spending to afford defense, maybe he should start looking, cutting the pork barrel spending that he brings home to Kentucky,” Christie said. “Maybe Senator Paul could, you know, deal with that when he’s trying to deal with the reduction of spending on the federal side, but I doubt he would, because most Washington politicians only care about bringing home the bacon so they can get re-elected.

Later in the day Paul said in an interview, “This is the king of bacon talking about bacon.”

Paul added, “It’s not helping the party for him to pick a war with me. It’s a big mistake. It’s not very smart. And it’s not a good way to grow the party. Why would he want to pick a fight with the one guy who has a chance to grow the party by appealing to the youth and appealing to people who would like to see a more moderate and less aggressive foreign policy?”

Speaking about the ongoing battle with Christie in a radio interview, Paul said, “I didn’t choose this fight… But he WILL lose.”