Thomas Massie: “There Are A Bunch Of Zombies Here” 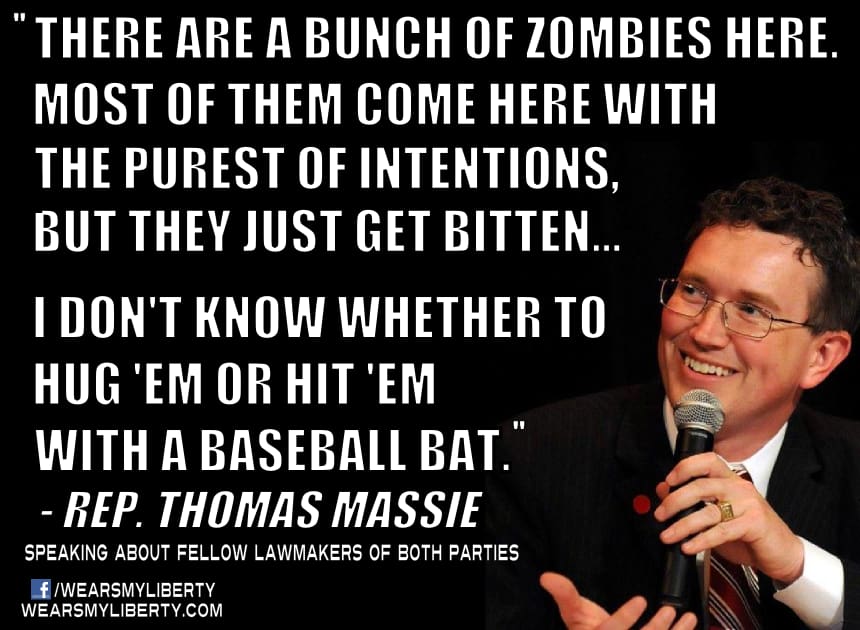 Freshman Representative Thomas Massie of Kentucky was featured in a front page article in the Wall Street Journal.

The article gives details about Massie’s life – he graduated from MIT with degrees in mechanical and electrical engineering, he appeared twice on the TV show “Junkyard Wars”, he lives in a solar-powered home that he built and he drives an electric Tesla car.

The article also goes on to describe how Massie and a handful of other freshman lawmakers are willing to vote against the directions of their own party’s leadership, including not voting for the re-election of John Boehner as Speaker of the House.

It took Mr. Massie just a few weeks to run afoul of party leaders. In late December, Mr. Boehner was negotiating with President Barack Obama to avoid a combination of pending tax increases and spending cuts that was nicknamed the fiscal cliff. As talks fizzled, Mr. Boehner asked the House to approve extending tax rates for all but million-dollar earners.

Mr. Massie, who was sworn in early after his predecessor resigned, opposed raising tax rates and voted to block it.

Mr. McCarthy, the No. 3 Republican in the House, bounded across the House floor to scold the newcomer, Mr. Massie recalled. Mr. McCarthy then turned to Ohio Rep. Jim Jordan, ringleader of the revolt, and said: “Jim, he doesn’t even know what he’s doing. He doesn’t know what you’re getting him into.”

Mr. Massie’s reputation was cemented weeks later when he tried to deny Mr. Boehner’s re-election as speaker. Although the plot fizzled, 12 Republicans voted for someone else or abstained, the most defections by fellow party members for a speaker since 1923.

On the topic of his fellow lawmakers Massie said, “There are a bunch of zombies here.  Most of them come here with the purest of intentions, but they just get bitten… I don’t know whether to hug ’em or hit ’em with a baseball bat.”

Although he feels pressure from both sides of the aisle, Massie said, “I’m going to hang in here like a hair in a biscuit.  I’m digging in for the long haul.  This place is worse than I thought.”

You can read the full article that appeared on the front page of the Wall Street Journal here.

An alternate source for the text of the article can be found on Massie’s House page here.