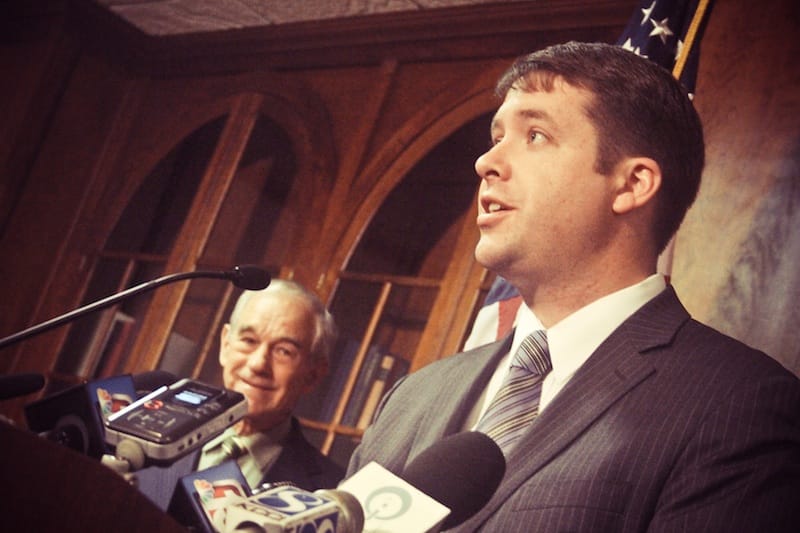 Former Ron Paul aide A.J. Spiker was elected Chairman of the Iowa Republican Party after the 2012 Iowa Caucus.  The establishment Republicans in Iowa, including Governor Terry Branstad, have been fighting to remove him from office and re-take the party from liberty activists ever since.

The Iowa Caucus is the first contest of the primary season and therefore one of the most important.  And Ron Paul supporters don’t need to be told how important it is to have a fairly run contest.

Although retired from office, Ron Paul is still doing his part to help Spiker and the liberty members in Iowa.

On December 13th Ron and Carol Paul are having a Christmas party at the Hilton in Houston, Texas with the benefits going to the Iowa GOP.

If a Christmas party with fellow liberty lovers wasn’t fun enough, the event description says that your ticket guarantees you a professionally taken photograph of yourself and Ron Paul.

Tickets are available at RonPaulChristmasParty.com

Hosted by the Republican Party of Iowa, join with your fellow advocates of liberty to Celebrate the Holiday. This event will be jam packed with Christmas food, desserts, cocktails, tons of decorations, great music and the Champion of the Constitution himself.

As an added bonus, your ticket guarantees you a professionally taken, personal photograph with yourself and Ron Paul!

It’s one thing to tell your friends and co-workers on Monday morning that you went to just a regular, old Christmas Party.

It’s another to tell them you went to the Christmas Party of the Century and spent it with Ron and Carol Paul!

This is a an absolutely once in a lifetime event that you do not want to miss. Only a limited number of tickets will be sold so reserve yours right away.

Your access to the Presidetial Suite also includes access for our Christmas Party to follow. A very limited supply of tickets will be sold for Ron Paul’s Presidential Suite Reception.

A limited number of discounted hotel rooms are available as well for all guests. Your hotel reservation is between you and the Hilton and not affiliated with the Iowa GOP. You can reserve your room at the special“Ron Paul Christmas Party” link right here:

One night and one night only. Friday, December 13th at the Hilton Post Oak in Houston, Texas. See you there!