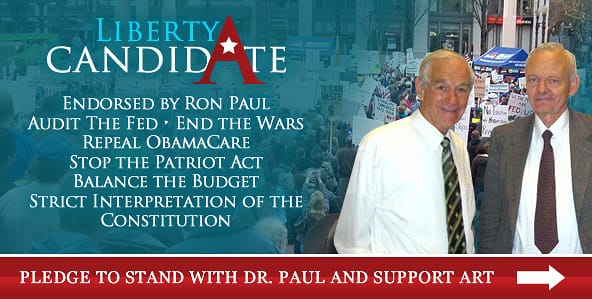 Art Robinson, a Ron Paul endorsed liberty candidate that ran for Congress in 2010 and 2012, was elected Chairman of the Oregon Republican Party in a special election held Saturday.

Party officials had planned to vote for the recall of former Chairwoman Suzanne Gallagher, but Gallagher stepped down the night before the vote.  She leaves office only six months after her election to replace Allen Alley.  The purpose of the meeting was then changed to the election of a new chair.  Robinson won on the third ballot by a vote of 55-52.

The previous ORGOP Chairman, Allen Alley, is well known by Ron Paul supporters.  It was under his direction that the 2012 Oregon District Conventions were shut down early before all of the delegates and alternates could be selected.  At the time, a majority of Ron Paul delegates were being selected to go to the RNC at all five district conventions around the state.

The chairman then decided that the conventions would end at 5pm.  Votes for adjournment were taken and voted down in each district.  However, each convention was told that the others had voted to adjourn.  The ORGOP was then able to appoint their own alternate delegates to the RNC.

This video shows party officials at the CD4 convention trying to adjourn the meeting and quickly leave with the ballots.  The woman in the video says that she was told by Alley to take the ballots.

Despite these dirty tricks by party leadership Ron Paul supporters were still able to grab a majority of the delegate slots to the RNC from Oregon.  And Oregon was one of the six states to put Dr. Paul’s name in for nomination on the floor in Tampa.

The job of liberty members in the Oregon GOP will now be made much easier under Chairman Robinson.

This is a video of Robinson giving a speech while he was running for chairman in February.  In it he outlines his vision of how the Oregon Republican Party should be run in order to beat incumbent Democrats.

And here’s a video from his campaign for US House where he talks about the need to end the Federal Reserve and return to sound money.