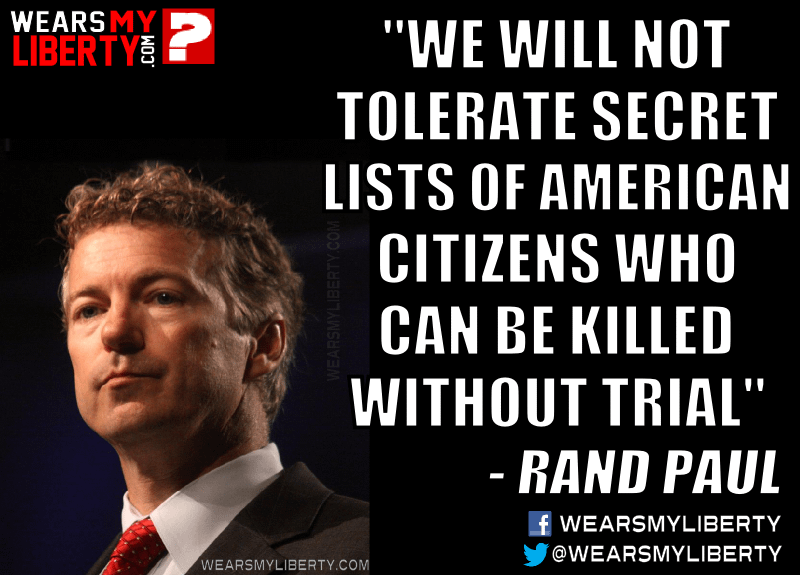 Senator Rand Paul gave the Tea Party response to President Obama’s State Of The Union address on Tuesday.  He did a great job at going after both Democrats and Republicans that have grown government.  He was confident and delivered a view of how America has the opportunity to be great once again if it returns to the limited government outlined in the Constitution.

Unfortunately Paul’s response was not aired on TV and instead was streamed online.

It’s dissapointing that the networks didn’t show both Marco Rubio’s official GOP response and Rand Paul’s Tea Party response.  It would be nice to let the public hear from both both sides of the Republican Party and then allow them to decide which direction it should go in the future.


“Sen. Rand Paul’s fiery denunciation of Beltway business as usual showed why the mainstream of the Republican Party has such a hard time dealing with the Tea Party. People like Rand Paul and his father, former Rep. Ron Paul, make other Republicans look like go-along, get-along career politicians.”

Here is a video and some text highlights in case you missed it:

“The President does a big “woe is me” over the $1.2 trillion sequester that he endorsed and signed into law. Some Republicans are joining him. Few people understand that the sequester doesn’t even cut any spending. It just slows the rate of growth. Even with the sequester, government will grow over $7 trillion over the next decade.

Only in Washington could an increase of $7 trillion in spending over a decade be called a cut. “

“It is often said that there is not enough bipartisanship up here.  That is not true.  In fact, there is plenty.

Both parties have been guilty of spending too much, of protecting their sacred cows, of backroom deals in which everyone up here wins, but every taxpayer loses.

It is time for a new bipartisan consensus.

It is time Democrats admit that not every dollar spent on domestic programs is sacred. And it is time Republicans realize that military spending is not immune to waste and fraud.

Where would we cut spending; well, we could start with ending all foreign aid to countries that are burning our flag and chanting death to America.

The President could begin by stopping the F-16s and Abrams tanks being given to the radical Islamic government of Egypt.

Not only should the sequester stand, many pundits say the sequester really needs to be at least $4 trillion to avoid another downgrade of America’s credit rating.

Both parties will have to agree to cut, or we will never fix our fiscal mess.

Bipartisanship is not what is missing in Washington. Common sense is.”

On The Federal Reserve:

“Trillion-dollar deficits hurt us all.

Printing more money to feed the never-ending appetite for spending hurts us all.

We pay higher prices every time we go to the supermarket or the gas pump. The value of the dollar shrinks with each new day.”

“Next month, I will propose a five-year balanced budget, a budget that last year was endorsed by taxpayer groups across the country for its boldness, and for actually solving the problem.

I will work with anyone on either side of the aisle who wants to cut spending.

But in recent years, there has been no one to work with.

The President’s massive tax hikes and spending increases have caused his budgets to get ZERO votes in both houses of Congress. Not a single Democrat voted for the President’s budget!”

The only stimulus ever proven to work is leaving more money in the hands of those who earned it!

For those who are struggling we want to you to have something infinitely more valuable than a free phone, we want you to have a job and pathway to success.”

We must be the party who sees immigrants as assets, not liabilities.


“For those striving to climb the ladder of success we must fix our schools.

America’s educational system is leaving behind anyone who starts with disadvantages.

We have cut classroom size in half and tripled spending on education and still we lag behind much of the world.

A great education needs to be available for everyone, whether you live on country club lane or in government housing.

This will only happen when we allow school choice for everyone, rich or poor, white, brown, or black.

Let the taxes you pay for education follow each and every student to the school of your choice.

Competition has made America the richest nation in history. Competition can make our educational system the envy of the world.

The status quo traps poor children in a crumbling system of hopelessness.

When every child can, like the President’s kids, go to the school of their choice, then will the dreams of our children come true!”

“Washington could also use a good dose of transparency, which is why we should fight back against middle of the night deals that end with massive bills no one has read.

We must continue to fight for legislation that forces Congress to read the bills!

We must continue to object when Congress sticks special interest riders on bills in the dead of night!

Sweep the place clean. Limit their terms and send them home!

I have seen the inner sanctum of Congress and believe me there is no monopoly on knowledge there.

“We are the party that adheres to the Constitution. We will not let the liberals tread on the Second Amendment!

We will fight to defend the entire Bill of Rights from the right to trial by jury to the right to be free from unlawful searches.

We will stand up against excessive government power wherever we see it.

We cannot and will not allow any President to act as if he were a king.

We will not let any President use executive orders to impinge on the Second Amendment.

We will not tolerate secret lists of American citizens who can be killed without trial.

Montesquieu wrote that there can be no liberty when the executive branch and the legislative branch are combined. Separation of powers is a bedrock principle of our Constitution.

We took the President to court over his unconstitutional recess appointments and won.

If necessary, we will take him to court again if he attempts to legislate by executive order.

Congress must reassert its authority as the protector of these rights, and stand up for them, no matter which party is in power.

How do you think Rand did in his response?

How did it compare to the official GOP response by Marco Rubio?