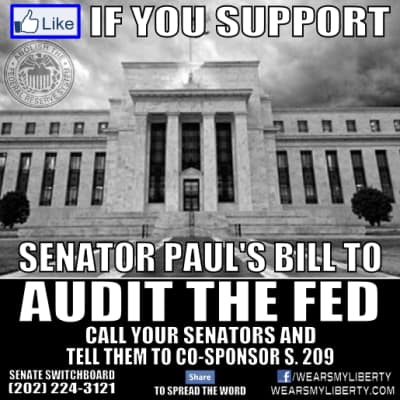 Senator Paul has said that he plans to hold up the nomination of Janet Yellen as the next Federal Reserve Chair until Harry Reid agrees to let the Senate vote on his bill to audit the Fed.

Please use the link below to contact your Senators and tell them to co-sponsor and vote for the “Audit The Fed” bill – S. 209.

You can also sign Campaign For Liberty’s petition to Congress HERE.

The bill is identical to Ron Paul’s “Audit The Fed” bill that was passed in the House last year by a vote of 327-98.  Rep. Paul Broun re-introduced the same bill in the House at the beginning of this session and currently has over 100 co-sponsors.

Sen. Rand Paul has introduced the bipartisan Federal Reserve Transparency Act of 2013. Known widely as “Audit the Fed,” the bill calls to eliminate restrictions on Government Accountability Office (GAO) audits of the Federal Reserve and mandating the Fed’s credit facilities, securities purchases, and quantitative easing activities would be subject to Congressional oversight.

“The Fed’s operations under a cloak of secrecy have gone on too long and the American people have a right to know what the Federal Reserve is doing with our nation’s money supply,” Sen. Paul said. “Audit the Fed has significant bipartisan support in Congress and across the country and the time to act on this is now.”

The full text of the bill can be read on Senator Paul’s website.

Paul’s bill currently has 24 other co-sponsors:

Overall there are 36 current Senators that have co-sponsored either the 2012 or 2013 version.

There are also 6 Senators that voted for “Audit The Fed” in the House in 2012:

You can find contact information for your Senators here: