The Afghanistan War – Longest In American History – Rolls On 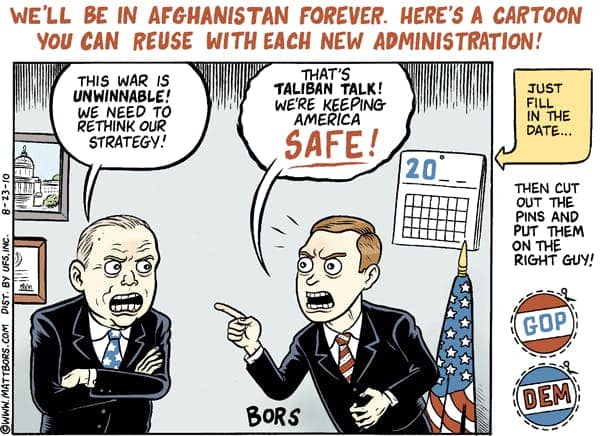 This cartoon was published 7 years ago and it’s prediction is still valid today. The only question is whether the artist should have left the “0” off of the date on the calendar.

Sixteen years after it began, the longest war in American history rolls on with no end in sight.  Three different presidents have now increased US troop levels in Afghanistan.  We can see that whichever party is in power, war will continue.

If McCain in 2008, Romney in 2012 or Hillary in 2016 had won would things be different?  No.  They all supported continuing – and even increasing – US involvement in the middle east.

Even those that campaigned on ending the war – Obama and Trump – changed their minds once in office.  The status quo wins.

Children born after the start of the war in Afghanistan will soon be sent there to fight, and die.  And they’ll be fighting against an enemy that not only had nothing to do with 9/11, many of them will have also been born after 2001.  Both sides will have grown up their whole lives never knowing a time without being at war against the other.  If the only world you knew was one in which your friends and family have been fighting and dying in a war against a certain group, how will the cycle ever end?

However, we know that the war must end eventually. As Ron Paul said, “The sad thing is, our foreign policy WILL change eventually, as Rome’s did, when all budgetary and monetary tricks to fund it are exhausted.”

Even one of the first posts on this website from 5 years ago warned that continued US involvement in Afghanistan will end in the same financial collapse and withdrawal the Soviets experienced.

We have a choice to make.  We can spend trillions of dollars and lose thousands of more lives until the debt created by endless wars finally collapses the Dollar and the US economy.

Or, we can do the right thing and save the lives of the next generation by bringing them home and ending this war.