Ron Paul On Healthcare In America – Why Government Is The Problem, Not The Solution 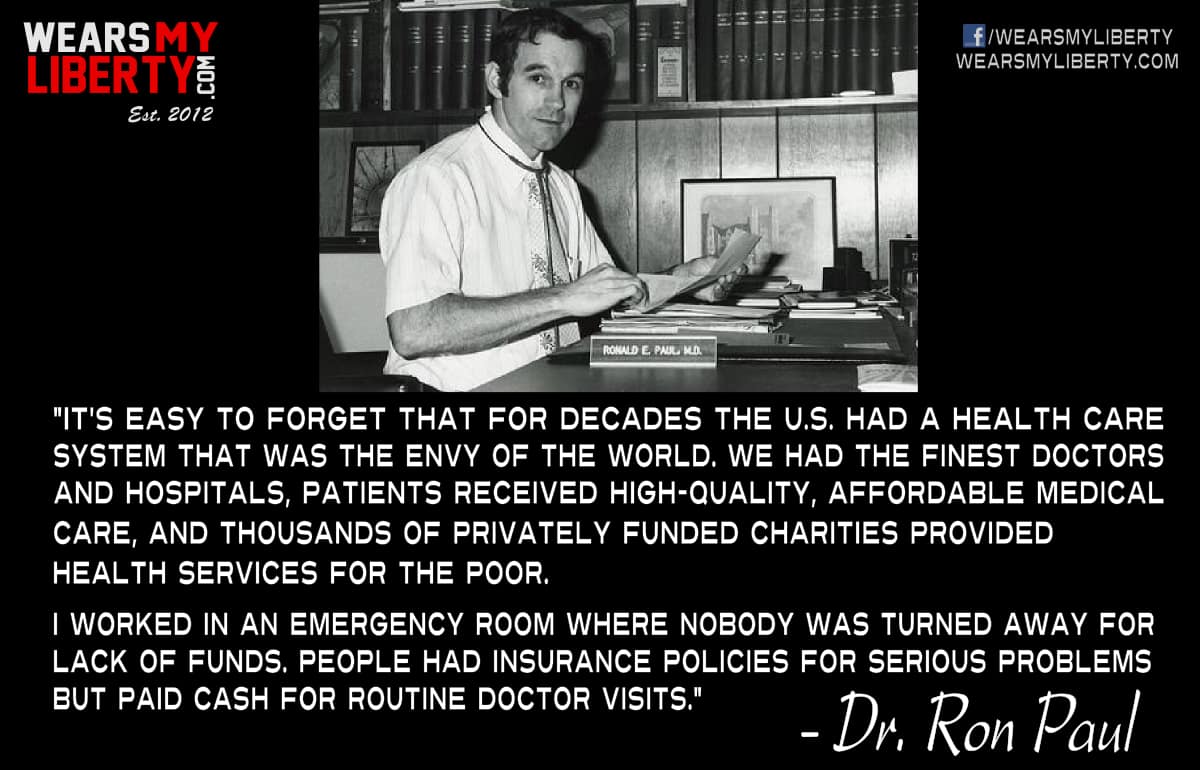 As a doctor, Ron Paul has first hand experience with the health care system in America.


“It’s easy to forget that for decades the U.S. had a healthcare system that was the envy of the world.  We had the finest doctors and hospitals, patients received high-quality, affordable medical care, and thousands of privately funded charities provided health services for the poor.

I worked in an emergency room where nobody was turned away for lack of funds.  People had insurance policies for serious problems but paid cash for routine doctor visits.”  – Doctor Ron Paul

When government gets involved and distorts a market it causes prices to rise and quality to decrease.  In 2006 Paul wrote about why costs are rising and how they can be lowered:

We should remember that HMOs did not arise because of free-market demand, but rather because of government mandates. The HMO Act of 1973 requires all but the smallest employers to offer their employees HMO coverage, and the tax code allows businesses — but not individuals — to deduct the cost of health insurance premiums. The result is the illogical coupling of employment and health insurance, which often leaves the unemployed without needed catastrophic coverage.

While many in Congress are happy to criticize HMOs today, the public never hears how the present system was imposed upon the American people by federal law. As usual, government intervention in the private market failed to deliver the promised benefits and caused unintended consequences, but Congress never blames itself for the problems created by bad laws. Instead, we are told more government — in the form of “universal coverage” — is the answer. But government already is involved in roughly two-thirds of all health care spending, through Medicare, Medicaid, and other programs.

Unfortunately, the Congress did not listen to Paul’s advice and instead went the opposite direction.

Doctors focused on treating patients, without the red tape and threat of lawsuits that plague the profession today. Most Americans paid cash for basic services, and had insurance only for major illnesses and accidents. This meant both doctors and patients had an incentive to keep costs down, as the patient was directly responsible for payment, rather than an HMO or government program.

The lesson is clear: when government and other third parties get involved, health care costs spiral. The answer is not a system of outright socialized medicine, but rather a system that encourages everyone — doctors, hospitals, patients, and drug companies — to keep costs down. As long as “somebody else” is paying the bill, the bill will be too high.

If everyone is forced to buy something, the price will rise.  This is as true for health insurance as it would be for any other product.  If a business knows you must buy their product they can charge much higher prices than if they had to persuade you and earn your money.

Also, if a third party is paying for a product or service the price will rise.  When a patient pays for their routine medical care they have an incentive to shop around and look for the best deal.  The doctor also has an incentive to offer the best service at competitive prices if they want to attract business.  However, if the patient isn’t the one paying they have little reason to care what the costs are.

How many people would pay for a $35 aspirin while in the hospital if they were responsible for paying the bill ?  What would happen if they were – would only the rich be able to afford aspirin or would hospitals be forced to lower costs?