Ron Paul Has Some Advice For The GOP 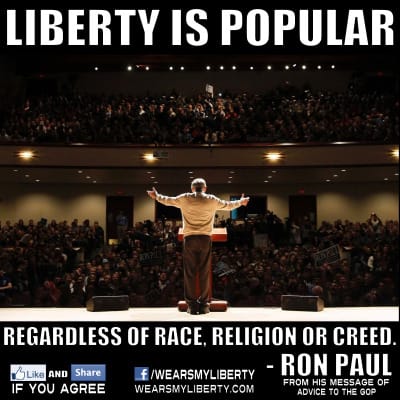 Ron Paul has a word of advice for Republicans who are still trying to figure out how they lost the election.  As they try to place blame, make excuses, and fight to find their identity going forward Paul says that the answer is clear… the GOP must embrace the Liberty message.  That is the real key to reaching new demographics.  As he says, “Liberty is popular – regardless of race, religion or creed.”

That can be seen by the number of likes, shares and comments his message recieved just hours after being posted on his Facebook page:

America is over $16 trillion in debt. The “official” unemployment rate still hovers around 8%.

Our federal government claims the right to spy on American citizens, indefinitely detain them, and even assassinate them without trial.

Domestic drones fly over the country for civilian surveillance.

Twelve million fewer Americans voted in 2012 than in 2008, yet political pundits scratch their heads.

It’s not hard to see why, though.

To go along with endorsing a never-ending policy of bailouts, “stimulus packages,” and foreign military adventurism, the establishment of neither major party questions the assaults on Americans’ liberties I’ve named above.

As my campaign showed, the American people are fed up. Many realized heading into Tuesday that regardless of who won the presidential election, the status quo would be the real victor.

GOP leadership is now questioning why they didn’t perform better.

They’re looking at demographic changes in the United States and implying minorities can only be brought into the party by loudly advocating for abandoning what little remains of their limited government platform and endorsing more statist policies.

My presidential campaign proved that standing for freedom brings people together.

Liberty is popular – regardless of race, religion, or creed.

As long as the GOP establishment continues to not only reject the liberty message, but actively drive away the young, diverse coalition that supports those principles, it will see results similar to Tuesday’s outcome.

A renewed respect for liberty is the only way forward for the Republican Party and for our country.

I urge all my Republican colleagues to join the liberty movement in fighting for a brighter future.

If the GOP wants any chance of winning in the future they must grow the party by bringing in youth and minorities.  They did the exact opposite in 2012, shutting out Ron Paul supporters and costing themselves millions of votes and grassroots activists.  The GOP thought that they could dismiss the huge crowds that Paul attracted at colleges across the country.  But those college students are the future.

The GOP now has the chance to put aside differences and welcome Ron Paul supporters to the party.  They need to refocus their message to one of strictly following the Constitution and embrace the ideas of liberty, peace, and limited government.  If they do there will be a bright future for both the Republican Party and our country.