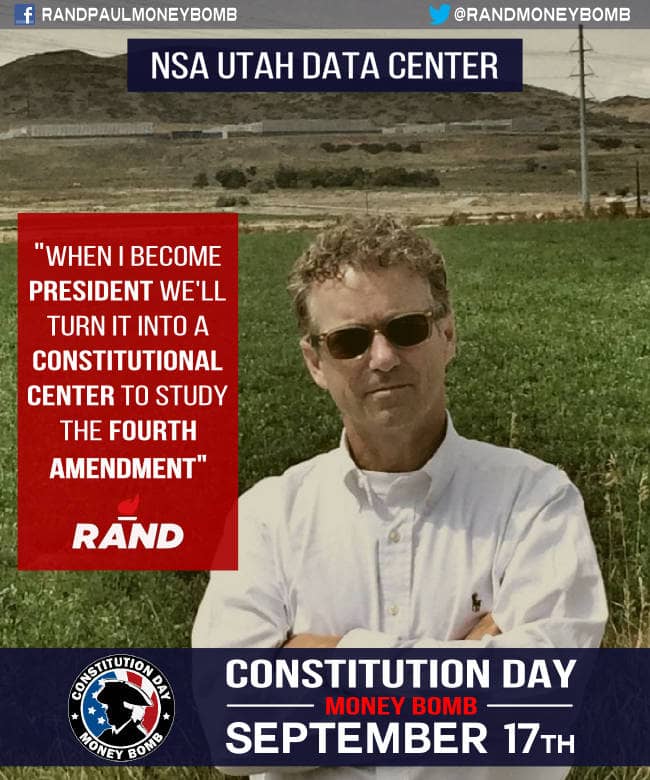 Grassroots supporters are organizing a “Constitution Day Money Bomb” on September 17th for Rand Paul, the only candidate that is speaking about following the Constitution and the entire Bill of Rights.

The organizers have experience planning and promoting money bombs for Ron Paul like “No One But Paul”, “In It To Win It” and “Rise For Liberty” – collectively raising millions of dollars in total.

If you are unfamiliar with a money bomb – on September 17th supporters everywhere will join together and donate to Rand Paul at the same time.  When we all come together and combine our donations we can have an effect that is greater than the sum of it’s parts.  If the number is large enough it will create buzz and positive news stories.

On the day of the money bomb, all donations will be made to the official campaign’s secure donation page:  https://secure.RandPaul.com/

The success of a money bomb relies on people like you, grassroots supporters sharing the ads and telling their friends.

If you’d like to contribute content or just help promote, here are some links to use to get the word out:

Pledge To Join And Get An Email Reminder: http://RandPaulMoneyBomb.com