Jusin Amash: Irresponsible And Immoral For Congress Not To Vote On War 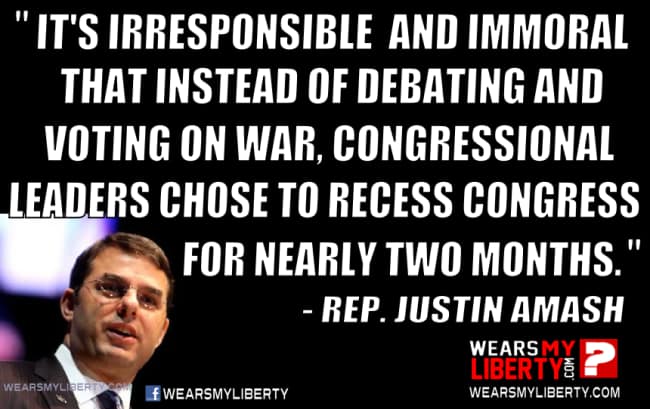 “It is irresponsible and immoral that instead of debating and voting on war, Congressional leaders chose to recess Congress for nearly two months.”  – Rep. Justin Amash

It’s irresponsible & immoral that instead of debating & voting on war, congressional leaders chose to recess Congress for nearly two months.

Even if you agree with a particular military action, it must first be debated and voted on by Congress.

The power to go to war is too important to be given to one person.

In 2007, then Senator Barack Obama made it clear that he agreed:

“The President does not have power under the Constitution to unilaterally authorize a military attack in a situation that does not involve stopping an actual or imminent threat to the nation.

As Commander-in-Chief, the President does have a duty to protect and defend the United States.  In instances of self-defense, the President would be within his constitutional authority to act before advising Congress or seeking its consent.

History has shown us time and again, however, that military action is most successful when it is authorized and supported by the Legislative branch. It is always preferable to have the informed consent of Congress prior to any military action.”

Unfortunately, as is the case throughout history, once in office the President has changed his mind and fully embraced the powers that he once campaigned against.

And Congress once again chooses to take the coward’s position.  So afraid to vote and be put on record regarding an important issue – lest they be judged wrong in the future – they would rather concede more power to the Executive and sink themselves further into irrelevance.